Surgery duration:
about 180 minutes
Costs:
1st treatment from 4700 €
any further treatment from 3900 €,
plus 1500 € (optional, if an additional LASER lipolysis treatment is desired. More info)
incl. 19% VAT plus anesthesia
Anesthesia:
Twilight Sleep or General anesthetic
Stay:
1 Night stationary
After treatment:
Plasters remain for about 4 weeks, compression bra should be worn for 4 weeks, re-presentation after 10 days, no stringing needed 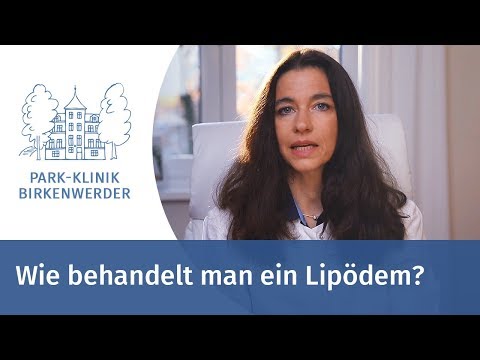 We have good news!

We have expanded for you so that we can specialize entirely in lipedema there. For that we need space and time. And that’s exactly why we opened a new clinic wing on our premises, the Luisenflügel. The LipoKlinik is now housed here with two additional, state-of-the-art operating rooms and recovery room.

Lipedema is a pathological change in adipose tissue which, as it progresses, can lead to a considerable reduction in the quality of life. Usually only women are affected by lipedema.

The starting point of the disease is usually an initial hormonal change, such as the onset of puberty, pregnancy or - rarely - menopause: during these hormonal upheaval phases in women, there is a surge of fatty tissue in typical areas of the disease: thighs, lower legs, inside of the knees , Hips, buttocks and also arms.

The affected fat cells appear to be pumped up due to the accumulation of lymphatic fluid associated with the disease. In advanced lipedema, e.g. in stage 3, grotesque body shapes with overhanging skin-fat flaps can arise, which are then also associated with considerable pain in addition to the restricted movement.

How do you recognize lipedema?

An increase in the circumference of the legs and arms beginning with puberty, pregnancy or menopause is suspect. The skin is irregular on its surface and very sensitive to touch. Hands and feet are still slim. Exercise and a healthy diet have no significant effect on the development of the body’s silhouette. Blue spots appear quickly, even with the slightest trauma. Another person in the family is also affected by this appearance.

All patients who come to our specialist clinic in order to receive the best possible treatment should have received the specialist diagnosis “lipedema” from a phlebologist, vascular surgeon or another specialist familiar with this clinical picture before the first consultation appointment. Ideally, you should also be provided with flat-knit compression garments and wear them consistently.

By making a diagnosis with a specialist, other causes of weight gain such as venous insufficiency with the help of sonography and other clinical examination methods are excluded. If you have varicose veins accompanying your lipedema, vein stripping or some other type of obliteration of the varicose veins should be performed before lipedema surgery.

How are lipedema divided?

From the experienced surgeon in the Park-Klinik Birkenwerder near Berlin, liposuction is a very low-risk procedure, however, it is not possible to exclude developing skin retractions or contour irregularities (dents).

In addition, depending on the severity, there are 5 types:

The partial bruising that occurs during liposuction disappears after a few weeks.

The gentle Waterjet Assisted Liposuction (WAL) removes the diseased lipoedema fat cells without destroying the connective tissue structures, blood vessels, lymph channels and nerves. This can be aesthetically quite beautiful results on the affected body regions.

On the day of the operation, the surgeon first marks the operating area with a pen. About a few tiny small punctures then a saline solution is injected. It also contains adrenaline and a local anesthetic. The solution quenches the bleeding that occurs during aspiration, soothes the pain of the patient and causes the fat cells stored there to swell, making them easier to remove. Using a small cannula, you can then aspirate up to 9 liters of fat cells, lymph and blood from the subcutaneous fatty tissue.

The operations take about 120 minutes each. An anesthetist is always present accompanying the operation and can offer either a drowsy sleep or a general anesthetic if necessary. As a rule, one night is planned in the clinic. For further safety and avoidance of complications, maximum fat removal of up to 10% of body weight should not be exceeded. Also, the operated body surface must be kept as low as possible, which is why lipoedema must always be operated in several steps.

What is WAL (water jet associated liposuction) and how does such an operation work?

On the day of the operation, the surgeon first marks the operation area with a pen. A saline solution is then injected into the fatty tissue through several tiny punctures. The solution also contains adrenaline and a local anesthetic. The solution stops the bleeding that occurs during suction, relieves the patient's pain and allows the fat cells stored there to swell so that they can be removed more easily. With the help of a narrow cannula, up to 9 liters of fat cells, lymph and blood are sucked out of the subcutaneous fatty tissue.

The technique of the water jet gently treats the lymphatic system. These are of particular importance for regeneration and the decongestion process. Thanks to the power of the water jet, we get a maximum amount of extracted fat with very attractive aesthetic results at the same time. 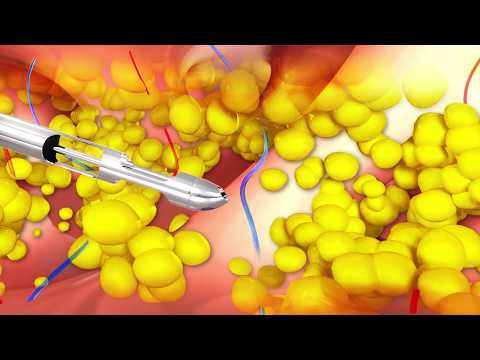 The operation takes about 120 minutes each. An anesthetist is always present during the operation and can offer either twilight sleep or general anesthesia if necessary. As a rule, an overnight stay in the clinic is planned. There is an upper limit to the volume to be aspirated. This is determined in a personal consultation.

What is LASER tightening?

Since January 2022 we have been offering our patients an optional LASER tightening treatment (in addition to water jet-associated liposuction). With this method, the fat cells are specifically destroyed with controlled and precise laser energy and liquefied by the heat (fat melt). The liquefied fat - depending on the size of the area to be treated - is broken down by the metabolism or sucked off manually.

The thermal effect of the laser also stimulates the formation of the skin's own collagen. In this way, LASER tightening treatment not only reduces fat, but also tightens the subcutaneous connective tissue.

Will life be changed for the better after lipedema surgery?

Lipedema surgery can change your life positively by improving lymphatic drainage. This reduces the volume of the extremities and makes the leg or arm slim again. This leads to the fact that the mobility increases again, sport is again possible without restrictions. In addition, pain can be reduced or even eliminated entirely. Items of clothing such as pants, blouses or tight boots can be worn again and secondary diseases such as joint problems are avoided.

What experiences have the patients had? 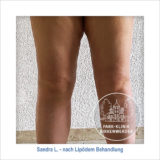 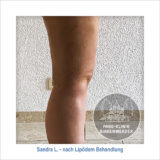 Freedom from pain and a much higher quality of life were the consistently positive results. After that, for me it was just a question of “where” and no longer “whether” an operation.

Since I live quite far away, I took the opportunity to conduct the consultation over the phone. The lady on the phone - Ms. Azdasht - was very nice. She explained the procedure to me and then answered any questions I had. The day before the operation I had my preparatory talk with Dr. medical Klaus Ueberreiter and the anesthesia team. It was short and uncomplicated. The standard questions were clarified (allergies, etc.) and which area should be operated on first. After that, before pictures were taken and the dimensions for the surgical bodice were taken.

My surgery was scheduled for 2 p.m. the following day. The preparation went without any problems: move into a room, undress/move for the operating room. Then it was off to the operating room. I wasn't particularly nervous. Which was probably because I felt very well looked after. After the anesthetist had pricked the access very well, Dr. medical Klaus Ueberreiter indicated the areas to be operated on and it was off to the operating theatre. There my legs were rubbed with two different solutions before I lay down on the operating table. I can't remember any more, because unfortunately the twilight sleep didn't work optimally for me and for this reason I was put under general anesthesia. After the operation, my first question was how many liters could be removed... "4 liters from the inner thighs!" Great! I was back in the room before I could ask that question. At first I felt a bit dizzy, but then I was fully recovered quite quickly. When I woke up I felt a strong burning sensation, which didn't last long. I didn't need painkillers in the evening or at night. I was able to get out of bed pretty quickly to try walking. My circulation was fit and the first attempt worked very well. Of course, I could only guess the result of the operation through the bodice. Nevertheless, under these circumstances I could already see a big difference between "before" and "after" the operation. The night that followed was good and in the morning I was allowed to take a shower. My incisions were weeping and not bleeding at all. The next morning after the doctor's round I was able to start my journey home. My friend picked me up. The drive was long and my legs started to hurt while driving. So when I got home I took my first painkiller (of a total of five).

The healing went great. The severe bruising and swelling subsided after fourteen days (I was also on sick leave during this time). A mixture of "walking a lot" and "putting your feet up" made a significant contribution to the rapid recovery and was very good for me. The first half hour of running was often painful, after that it was fine. After about 2.5-3 weeks, the bruises were completely gone and the swelling had also gone down very well. Hardenings were as good as gone after about 12-14 weeks. After the first operation, I could already see a big change: climbing stairs and hiking was much easier for me. My gait has also improved.

2nd OP
My second liposuction (for lipoedema) took place at the end of December 2019 (OS front and outside). The procedure corresponded to that of the first operation. The surgery went well and on schedule. My circulation remained constant afterwards. On the first day, only the wounds leaked out from the cuts. This was not the case with the first operation. I think that has contributed to the even faster healing. The numbness in the operated areas lasted about 8 weeks. Nevertheless, I was able to take the first steps on the day of the operation and quickly walk upright and briskly. I only took painkillers the day after the operation to make the long drive home and changing the compresses painless. During my stay in the clinic, I once again felt that I was in very good hands and that I was being competently advised and cared for. I would like to expressly thank the nursing team and the doctors at the Birkenwerder Park Clinic for this. As a result, I can state that the muscles on the front of the thighs are now very visible. My gait is better (legs are closer together), back pain is better b

Quality is the result of many years of research and development

The team of doctors at Parkklinik Birkenwerder has been using the gentle liposuction method for more than 20 years. We distinguish among the first users of the WAL method across Germany and Europe. Numerous scientific studies in cooperation with our clinic and the company Human Med. These scientific studies are accompanied by the University of Rostock. We are very proud that the real development steps to improve liposuction technology have come about in our company and have given them through us.

But the best technology is worthless if the craftsmanship is lost. Thanks to our decades of expertise in the field of fat transplantation, which depends on particularly fine liposuction techniques, we are not only one of the pioneers in this field, but also today among internationally sought-after experts.